3D
Scan The World
4,839 views 455 downloads
Community Prints Add your picture
Be the first to share a picture of this printed object
0 comments

Nandi is the name for the bull which serves as the mount (Sanskrit: Vahana) of the god Shiva and as the gatekeeper of Shiva and Parvati. In Hindu Religion, he is the chief guru of eighteen masters (18 siddhas) including Patanjali and Thirumular. Temples venerating Shiva display stone images of a seated Nandi, generally facing the main shrine. There are also a number of temples dedicated solely to Nandi.

The application of the name Nandi to the bull (Sanskrit: vṛṣabha) is in fact a development of recent centuries, as Gouriswar Bhattacharya has documented in an illustrated article entitled "Nandin and Vṛṣabha". The name Nandi was earlier widely used instead for an anthropomorphic deity who was one of Shiva’s two door-keepers, the other being Mahākāla. The doorways of pre-tenth-century North Indian temples are frequently flanked by images of Mahākāla and Nandi, and it is in this role of Shiva’s watchman that Nandi figures in Kālidāsa’s poem the Kumārasambhava. There are multiple versions of the cow Nandi, another can be found on MyMiniFactory to be downloaded! 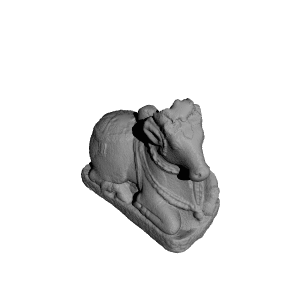 ×
0 collections where you can find Nandi Cow at The British Museum, London by Scan The World