3D
Scan The World
6,473 views 611 downloads
1 collection
Community Prints Add your picture
Be the first to share a picture of this printed object
0 comments

Narcissus is shown as a youth returning from a hunt. He stops to look into a pool of water and is mesmerised by his reflection, which he has never seen before. He falls in love with the beautiful image he sees and then cannot stop looking. This may have originally been the centrepiece for a fountain, and therefore shown the figure gazing into an actual pool of water.

When discovered in Florence this statue was identified as a statue of Cupid carved by Michelangelo which was thought to be lost. For many years after its acquisition by the V&A it was one of the most celebrated works in the Museum because of this attribution. It has since been identified as an ancient Roman copy of a classical model. It was extensively recut in the sixteenth century, with the head being added at this time, and is thought to be the work of the Florentine sculptor Valerio Cioli (ca. 1529 - 1599), who was a restorer of classical sculptures. The raised left arm dates from the nineteenth century. 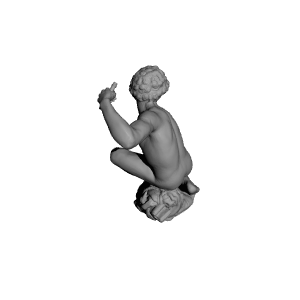 ×
1 collections where you can find Narcissus by vam