Narcissus, known as the "Mazarin Hermaphrodite" or "Genius of Eternal Rest"

3D
Scan The World
1,291 views 150 downloads
1 collection
Community Prints Add your picture
Be the first to share a picture of this printed object
0 comments

Narcissus, known as the "Mazarin Hermaphrodite" or "Genius of Eternal Rest"

Described in 1661 in the upper gallery of the Palais Mazarin, this work is the result of a restoration that combined the bust of an ancient funerary effigy and the lower body from another statue.

It was mutilated in 1670 by the Duc de Mazarin, husband of the cardinal's niece, in a fit of madness. The statue was widely acclaimed in the 18th and 19th centuries under the Romantic title "The Genius of Eternal Rest". 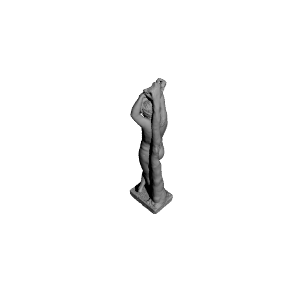 ×
1 collections where you can find Narcissus, known as the "Mazarin Hermaphrodite" or "Genius of Eternal Rest" by Scan The World