3D
360°
Featured Scan The World
3,670 views 559 downloads
2 collections
Community Prints Add your picture
Be the first to share a picture of this printed object
0 comments

The theme of the Neapolitan Fisherman is most probably inspired by Masaniello - an Italian fisherman who was the lead revolutionary of the 1647 Neapolitan fight against the Habsburg's rule over Spain. Depictions of Masaniello himself, but also of the "Neapolitan fisherman" type were prominent through Neapolitan and European art in the following centuries, usually depicting a man in loose white clothes, wearing a hat and often playing a guitar or a similar instrument.

This marble sculpture was designed by Carl Gustaf Qvarnström (1810-1867), who was a Swedish sculptor and painter. It represents the true image of a Neapolitan fisherman, sitting on fishing nets and casually reclining in relaxation, while holding the instrument in his left hand. The design was produced in Parian marble by Gustavsberg, a Swedish porcelain company that focused on art as well as household items, and later gifted to the museum by the last owner of Gustavsbergs Factories. 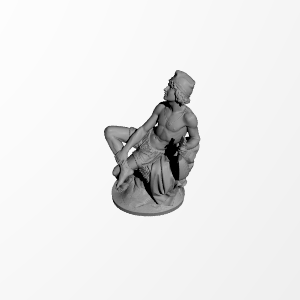 ×
2 collections where you can find Neapolitan Fisherman by nationalmuseumswe