Neapolitan Fisherman Playing with a Turtle at The Louvre, Paris

3D
Scan The World
4,663 views 244 downloads
Community Prints Add your picture
Be the first to share a picture of this printed object
0 comments

Neapolitan Fisherman Playing with a Turtle at The Louvre, Paris

This young fisher boy with infectious good humor is a landmark in the history of art. François Rude shook the foundations of conventional classicism by the ingenuousness of his subject and his non-idealized representation of nature. The boy's gracefulness undoubtedly ensured the success of the work, which inspired several artists, particularly Jean-Baptiste Carpeaux.

This cheerful boy, playing with a tortoise held captive by a reed, caused heated controversy at the Salon of 1833. For the first time, an artist had sculpted a lifesize marble of a picturesque figure, an anecdotal subject. It marked a complete break with classical ideology, whereby genre scenes were considered to be unworthy of statuary art, especially in a medium as noble as marble. Rude's theme and style also contradicted classical canons. Although reminiscent of antique sculpture, the work was imbued with an unprecedented feeling of freedom and freshness. The boy is naked like the heroes of mythology, but his body is not idealized and his hearty laugh reveals his teeth, a real breach of good taste. The tradition of representing children at play did exist in Hellenistic sculpture, but Rude emphasized the popular, lively aspect of his depiction. The child seated on a net is a young fisher boy, whose bonnet and scapular (the devotional object around his neck) show that he is from Naples. His attitude is carefree and his entire face - crinkled eyes, dimples, open mouth - is laughing.

In the wake of Mme de Staël's novel Corinne, or Italy (1807), picturesque figures of country people and fishermen became for poets and artists the embodiment of simple, innocent nature, while southern Italy was regarded as its last surviving refuge. Rude, who had never visited Italy, may have drawn his inspiration from scenes of Italian folklore by the Swiss painter Léopold Robert (1794-1835). With his plaster model, executed in 1829 and shown at the Salon of 1831, the sculptor inaugurated a theme destined to be hugely successful. At the Salon of 1833, Francisque Duret (1804-1865) showed a nimble, playfulNeapolitan Fisher Boy Dancing the Tarantella (Louvre). Among the many subsequent interpretations was Jean-Baptiste Carpeaux's outstanding Young Fisherman with Shell (Orsay, original plaster model at the Louvre). Its execution dates to the artist's first visit to Rome, where he ordered a cast of the face of Rude's Fisher Boy to be sent. Through the child's grace, naïveté, and carefree cheerfulness, Carpeaux paid a vibrant tribute to his master.

Despite the objections raised by conservative critics such as Gustave Planche, Young Neapolitan Fisher Boy was a huge success. It was purchased by Louis-Philippe's administration for the Musée du Luxembourg, reserved for the works of living artists. It was the first time the State had bought a work by the sculptor, then aged forty-nine. That same year, Rude was awarded the Cross of the Legion of Honor, and he received the commission for his best-known work, The Departure of the Volunteers of 1792, also known as La Marseillaise, one of the four high reliefs on the Arc de Triomphe, in the Place de l'Étoile, Paris (plaster model of the head now at the Louvre). 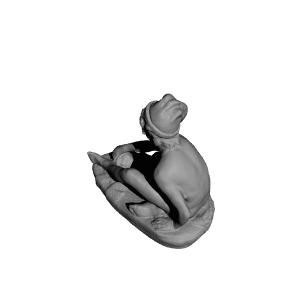 ×
0 collections where you can find Neapolitan Fisherman Playing with a Turtle at The Louvre, Paris by Scan The World