Neolithic figurine of a woman at The British Museum, London

3D
Support Free Scan The World
2,628 views 144 downloads
3 collections
Community Prints Add your picture
Be the first to share a picture of this printed object
0 comments

Neolithic figurine of a woman at The British Museum, London

Terracotta figurines were widely produced in the eastern Mediterranean region during the Neolithic period. The rounded forms of this figure evoke the concept of female fertility, though male figures, fgroups and animals are also known. The use of clay died out in the Cyclades in the Early Bronze Age, when the marble figures were made. 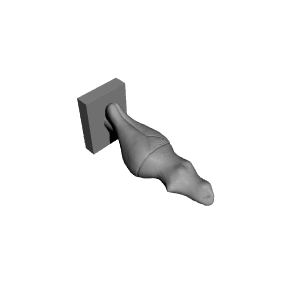 ×
3 collections where you can find Neolithic figurine of a woman at The British Museum, London by Scan The World