3D
Scan The World
2,476 views 106 downloads
Community Prints Add your picture
Be the first to share a picture of this printed object
0 comments

This is an ancient marble, originally Greek, sculpture from the Peloponnese region. The sculpture depicts a nereid seated on pistrice

The Nereids were sea nymphs in Greek mythology, fifty in total, daughters of Nereus and Doris. They helped sailors on their voyages when they faced fierce storms. They lived with their father in the depths of the Aegean Sea. One of the better known Nereids was Thetis, who was the mother of the hero Achilles.

The pistrice in Greek and Roman mythology is a legendary sea monster, with a snake's tail.

It is found in the depictions of Neptune's marches and other marine deities, or in Greek nautical maps, taken up to the Renaissance.

The pistrice was a great monster that also symbolized fear towards the unknown. In the Middle Ages the pistrice became a hybrid between fox and marine snake in the Carolingian period.

The sculpture was reemployed as fountain decorative elements 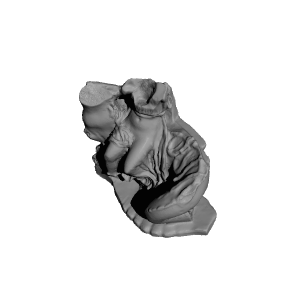