3D
4,413 views 144 downloads
Community Prints Add your picture
Be the first to share a picture of this printed object
0 comments

This 'new' chess piece adds another dimension to the traditional game that is popular all over he world. The pieces in the modern game of chess depict royalty and the church. For this reason I've named the new piece 'Earl' but it could just as easily be called Baron or Lord, all of which are regarded as being a Noble in the medieval hierarchy. However, 'Earl' seemed the best to me as an Earl is not too senior and this piece replaces two pawns on the front row at the start of the game.

How to play with the 'Earl':

The Earl is similar to a pawn in that his moves are restricted. However, he can always move up to two squares at a time (a Pawn can only move two straight forward on the first move).

An Earl can move straight and diagonally including moving sideway and back A pawn cannot do this.

This makes the 'Earl' a very useful player because he can move in all directions but is limited to two squares at a time.

An 'Earl' can take on both straight and diagonal moves.

Unlike pawns, if an Earl' reaches the opposing end of the board it cannot be swapped for one of their previously taken pieces.

All other rules stay the same. This keeps it easy so players quickly adapt...

Why play with 'Earls':

Adds a new dimension to the traditional game. This doesn't necessarily make the game quicker but gives a player loosing a number of key pieces an increased chance of still claiming victory. This can make it all the more interesting and challenging.

If one player is significantly better than another, such as when an experienced player is teaching a novice, the experienced player can start with all the traditional pieces and the novice is given Earl's as a competitive advantage. This can help new players stay engaged as, without an advantage, they can get tired or losing all the time.

Note: If you like this design check out all my other designs...

On a Replicator 2 print at 0.20mm/Std. resolution, 3 shells and 50% fill. Use Raft for ease of removal but no support required.
The .stl is for one Earl only but you obviously need to print two in white and two in black to exchange for the white and black pawns.

The design is scaled to be slightly shorter than a Rook/Castle but clearly larger than a pawn so it is easily identified like all other chess pieces. As different chess game manufacturers pieces will vary slightly in size you may want to scale up / down accordingly. 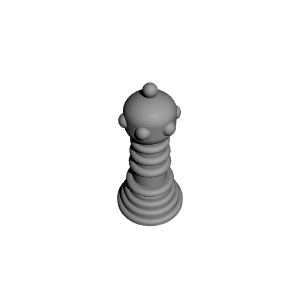