3D
Scan The World
6,388 views 600 downloads
Community Prints Add your picture
Be the first to share a picture of this printed object
0 comments

This sculpture was one of a dozen or so found at the Roman villa at Campo Iemini, dug up in spring 1794 by Robert Fagan (1761-1816) in partnership with Prince Augustus and Sir Corbet Corbet. Fagan was a a prominent member of the younger generation of British dealers and excavators resident in Rome. The statue, which immediately aroused great interest, was probably restored by Fagan's friend, the British sculptor John Deare (1758-1798), in whose Roman atelier it was in 1796.

The beauty of the statue's well-preserved head was particularly celebrated. The German Duchess of Anhalt-Dessau commissioned a marble copy of it, while several casts were sent to England (one of them to Charles Townley).

The Venus is of the Capitoline type, named after the most famous copy in the Capitoline Museum, to which some at the time of its discovery claimed it was superior. Prince Augustus had promised the statue to his brother, the Prince of Wales, and it entered the latter's collection at Carlton House. Four years after the death of George IV (1830), his successor William IV donated it to the British Museum. 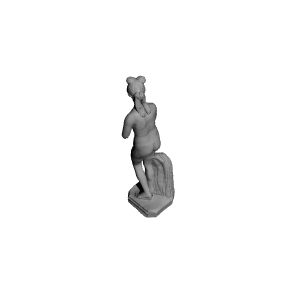 ×
0 collections where you can find Nude Venus at The British Museum, London by Scan The World