Nymph and and old Satyr

Nymph and and old Satyr

This marble relief depicts a nymph and an old satyr, a common scene in Greek mythology. Satyrs are a troop of male companions of Pan and Dionysus that roamed the woods and mountains. In mythology, they are often associated with male sex drive and many artists have portrayed them with erections. Satyrs acquired their goat-like aspect through later conflation with the Roman Faunus, a carefree nature spirit of similar temperament. Satyrs are described as roguish but faint-hearted folk — subversive and dangerous, yet shy and cowardly. As Dionysiac creatures, they are lovers of wine, women and boys, and are ready for every physical pleasure. They love to dance with the nymphs with whom they are obsessed and whom they often pursue. 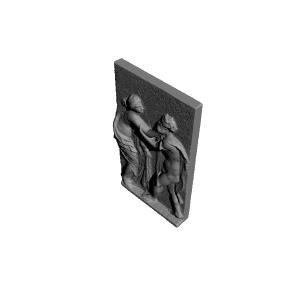 ×
0 collections where you can find Nymph and and old Satyr by Scan The World
×
Александр Владимиров
@1611
4
Printed on: Anycubic i3 Mega
Material: ABS
Posted at: 01st September 2019

thanks! very good model for printing!

I remixed this into a wall of Lego compatible bricks.