3D
Support Free Scan The World
2,891 views 152 downloads
1 collection
Community Prints Add your picture
Be the first to share a picture of this printed object
0 comments

The following has been copied from the Ogham in 3D website: https://ogham.celt.dias.ie/stone.php?lang=en&site=Drumlohan&stone=275._Drumlohan_IV&stoneinfo=description

Souterrain discovered on removing the outer bank at NW of an Early ecclesiastical site. Ten ogham stones were used in the construction of the rectangular chamber (Moore 1999, 151, 172-3) - five as lintels, which are now removed and placed upright beside the souterrain, and five as lining stones for the sides, which are still in position.

'Inscription on three angles (up-down-up), and in good condition, except for is fractureof the top of the stone, which has carried off the middle of the third word... After the N a mistaken B-score had been blocked out: it was not deepened, and the A was cut over it. The first A of ..SALAR is broken away, and the space between the scores of the L in CELI is flaked. If there were such a name as Crisalar, it would exactly fill the vacant space, but this is not a suggested restoration - only an indication of the length of the damaged word ' (Macalister 1945, 271-2).

'of Conlang? son of C. follower of the descendant of Q.'

Erected beside the souterrain on site at Drumlohan. The present location of this stone may be accessed via the National Monuments Service public map viewer on www.archaeology.ie.

Discovered in 1867 but ogham inscriptions not fully read until souterrain was dismantled in 1936 (Macalister 1945, 267). 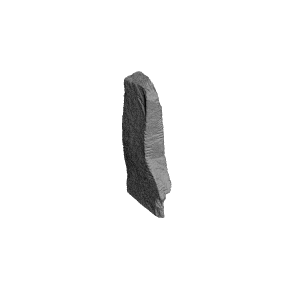