On the War Trail at The Art Institute of Chicago, USA

On the War Trail at The Art Institute of Chicago, USA

Canadian-born Alexander Phimister Proctor began his career as a sculptor of animals and, along with Edward Kemeys, achieved recognition for the works he created for Chicago's 1893 World's Columbian Exposition. During five years of study in France afterward, however, Proctor shifted his interests to large-scale figural studies, particularly of the American West. On the War Trail is a reduced version of a monumental bronze commissioned for the Civic Center in Denver, Colorado. Dignified and erect, with the Native American's spear thrust defiantly outward, horse and rider provide a striking antidote to the dejected, broken subject of James Earle Fraser's 'The End of the Trail' also available on Scan the World. 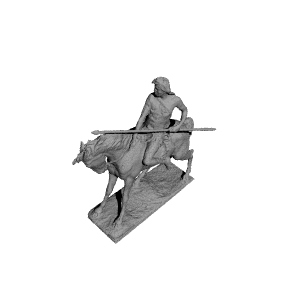