One Prudential Plaza in Chicago, Illinois

3D
Scan The World
2,254 views 88 downloads
1 collection
Community Prints Add your picture
Be the first to share a picture of this printed object
0 comments

One Prudential Plaza in Chicago, Illinois

Nothing screams 1950's architecture like a big limestone box with an equipment penthouse on the roof. There was an entire generation of architecture, not just in Chicago, where square stone, white, or glass boxes were in. The result is towers like this. Lifeless from a distance, they might as well hold cattle or cardboard boxes, for they completely fail to translate the imagination and inspiration of the human spirit into architectural form. They completely fail to soar skyward, but rather constrain people inside; obedient paper-pushers in their cubicle farm Hell. While that may seem a bit harsh, it's buildings like this that reflect not the grand spirit of freedom, but the conformity that inspired so many Soviet-era apartment blocks in Eastern Europe. Still, One Prudential Plaza isn't completely without merit. To start, it turned a portion of a dirty rail yard into productive commercial space. Further, this was the first skyscraper erected in the city after the Second World War, so that should count for something. Moreover, the building actually sports a work of art. The Prudential company's Rock of Gibraltar logo is in relief with gold accents on the lower extension of the building. This was executed by Alfonso Ianelli. 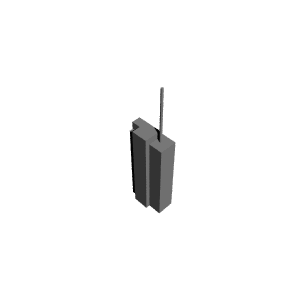 ×
1 collections where you can find One Prudential Plaza in Chicago, Illinois by jkurstin22