3D
Scan The World
1,825 views 103 downloads
Community Prints Add your picture
Be the first to share a picture of this printed object
0 comments

The scene takes place between two figures: a woman embracing with love a boy. The sculptural group depicts Agamennon's children in front of their father tomb. This interpretation at first was suggested by Winckelmann in 18th century and it is actually accepted for similar farewell scenes represented on attic funerary stelae from the 4th century B.C.

The funeral quality is emphasized by the shorn locks of the female figure with short curls, a sign of mourning.

Beyond the left leg of the boy, there is a stele inscribed in Greek with the sculptor's signature: "Menealaos student of Stephanos made it". It sugests a dating between the end of the 1st century B.C and the beginning of 1st century A.D. On the lower part of Electra's dress end on her hairstyle there are still traces of the original color.

The sixteenth century restoration of some parts of the statue are due to Ippolito Buzio. 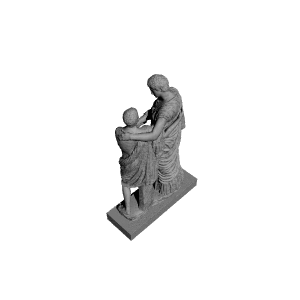