Orthostat with Syrians bearing tribute on their heads

3D
Scan The World
1,527 views 40 downloads
Community Prints Add your picture
Be the first to share a picture of this printed object
0 comments

Orthostat with Syrians bearing tribute on their heads

In the context of classical Greek architecture, orthostates are squared stone blocks much greater in height than depth that are usually built into the lower portion of a wall. They are so called because they seem to "stand upright" rather than to lie on their sides. In other contexts the English term is usually orthostat. It is typical in Greek architecture for pairs of orthostates to form the thickness of a wall, one serving as the inner and the other serving as the outer face of the wall. Above a course of orthostates, it is common to lay a course of stones spanning the width of the wall and joining its two faces (a binder course). This one depicts soldiers, from different orders of the Assyrian Army in procession. 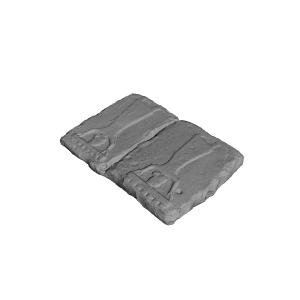