Pandora at The Palace of Versailles, France

3D
Scan The World
3,013 views 360 downloads
Add to collection
8 0
Community Prints Add your picture
Be the first to share a picture of this printed object
0 comments

Pandora at The Palace of Versailles, France

This is a marble sculpture depicting Pandora, created between 1685 and 1686 by Pierre Legros (1629-1714). In Greek mythology Pandora was the first woman on earth. Jupiter gave her a box with a strict instruction not to open it. Nevertheless, she did so and all the evils and misery contained in the box were released upon mankind. This marble sculpture was carved by John Gibson (1790-1866) who spent more of his working life in Rome and was a great admirer of Canova.

The Pandora myth first appears in lines 560–612 of Hesiod's poem in epic meter, the Theogony (ca. 8th–7th centuries BC), without ever giving the woman a name. After humans received the stolen gift of fire from Prometheus, an angry Zeus decides to give humanity a punishing gift to compensate for the boon they had been given. He commands Hephaestus to mold from earth the first woman, a "beautiful evil" whose descendants would torment the human race. After Hephaestus does so, Athena dresses her in a silvery gown, an embroidered veil, garlands and an ornate crown of silver. This woman goes unnamed in the Theogony, but is presumably Pandora, whose myth Hesiod revisited in Works and Days. When she first appears before gods and mortals, "wonder seized them" as they looked upon her. But she was "sheer guile, not to be withstood by men." 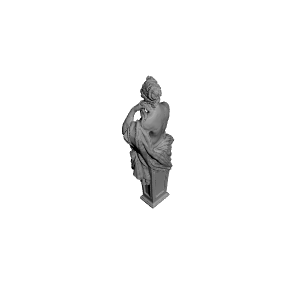 ×
0 collections where you can find Pandora at The Palace of Versailles, France by Scan The World