The Pergamon Altar is a monumental construction built in the first half of the 2nd Century BC in the ancient Greek city of Pergamon.

The altar was built in memory of King Eumene II's victory over the Gauls and surrounding tribes. The reliefs that decorate the walls of the altar depict a ruthless battle between Gods and Giants. here, we see Athena holding the giant Alcyoneus by the hair as she sends a snake to bite the terrified giant. The giant's mother Gaia, Mother Earth herself, looks helpless on the other side of Athena, where above her the victory Goddess Nike is already paying tribute to the winner. 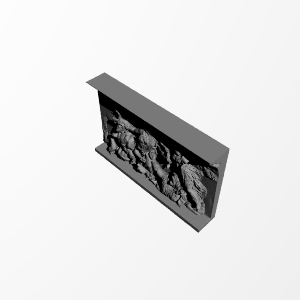 I remixed this into a set of Lego like blocks.