3D
Scan The World
2,730 views 153 downloads
1 collection
Community Prints Add your picture
Be the first to share a picture of this printed object
0 comments

The enormously popular Neoclassical sculptor Antonio Canova frequently made replicas or variants of his major works to satisfy the demand for his art. While executing a commission from Empress Josephine of France for a full-length statue of Paris (State Hermitage Museum, St. Petersburg), Canova carved this bust for his friend Antoine Quatremère de Quincy, a French Neoclassical theorist and critic who greatly influenced the sculptor’s artistic ideals. It depicts the moment in Greek mythology when the shepherd Paris, called upon by Zeus to judge who was the most beautiful among Hera, Athena, and Aphrodite, turns to gaze at the three goddesses. Canova exploited the subject to create an ideal head, balancing the geometry of pure forms with the sensuousness of Paris’s expression. Upon receipt of the gift, Quatremère stated: "There is in [the bust] a mixture of the heroic and the voluptuous, the noble and the amorous. I do not believe that in any other work you have ever combined such life, softness, and chaste purity." Documents indicate that Canova made four full-length marble statues and at least seven busts of Paris, a clear indication of the sculpture’s public success. 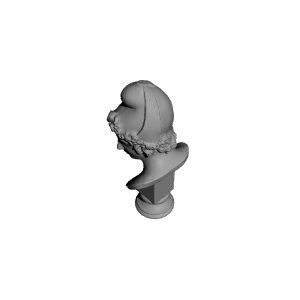 ×
1 collections where you can find Paris at The State Hermitage Museum, St Petersburg by Scan The World