La Parroquia de San Miguel Arcángel (Spanish for Parish of Saint Michael Archangel) is a catholic church and main landmark of the city of San Miguel de Allende, in the state of Guanajuato, in central Mexico.

It is one of the most-photographed churches in Mexico and the two tall towers of its neo-Gothic façade can be seen from most parts of town. The church was built in the 17th century with a traditional Mexican façade. Howevr, almost 200 years later, the original façade was demolished and the current Gothic façade was constructed in 1880 by Zeferino Gutierrez, an indigenous bricklayer and self-taught architect. It is said Gutierrez's inspiration came from postcards and lithographs of Gothic churches in Europe; however, the interpretation is his own and more a work of imagination than a faithful reconstruction. The main façade has two levels with arches, pilasters, floral motifs and a frieze on the first level. The second level has a choir window framed by pink sandstone. The bell tower is Moorish (from Wikipedia).

MiniWorld3D is excited to bring this model to life as a homage to all the people of Mexico and San Miguel de Allende. This model was designed from scratch completely in Fusion 360 by Daniel Muradás, no scans or repurposed models, so it's pristine clean for 3D printing! Please give credit, it's all about spreading culture and education!

No supports, brims or rafts needed.

Use slow speeds, such as 20 mm/s for outer perimiters, scale up or use resin for best results of details. 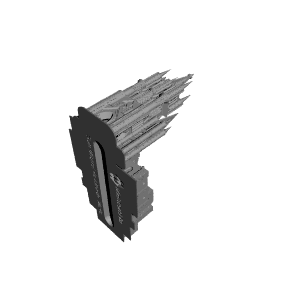