3D
360°
Scan The World
1,812 views 81 downloads
Community Prints Add your picture
Be the first to share a picture of this printed object
0 comments

This sublimely beautiful sculpture illustrates Parsvanatha's triumph over Samvara in considerable detail. Parsvanatha, the 23rd Tirthankara of the Jain religion, is depicted naked beneath a Dhataki tree, seated in a meditative posture on a simhasana (lion-supported throne). Meghakumara (Samvara) has sent a great storm (symbolised by the hands and drums in stylized clouds in the upper corners) to disturb his meditations, but the serpent-king Dharanendra raises up his seven hoods to provide shelter to the Jina. Dharanendera's consort Padmavati, seen to the Jina's left, holds an umbrella to further protect Parsvanatha from the forces of the storm. The wheel of law (dharmachakra), symbolizing the Jina's teachings, is beneath the throne, supported by a squatting gana (dwarf-like attendant). Flywhisk bearers stand in attendance, and celestial figures with garlands hover beneath the rain clouds. 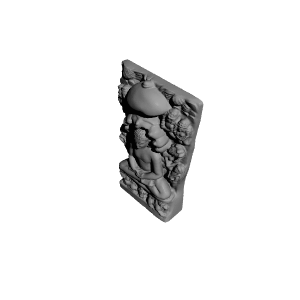 ×
0 collections where you can find Parsvanatha by vam