Part of the figurehead of HMS Bristol

3D
Scan The World
2,201 views 136 downloads
Community Prints Add your picture
Be the first to share a picture of this printed object
0 comments

Part of the figurehead of HMS Bristol

A white-painted female head which formed the figurehead of HMS 'Bristol' , a wooden screw frigate of 51 guns, 3027 tons burthen, built at Woolwich Dockyard in 1861. It was later reduced to 31 guns, sold out of the Navy in 1883 and broken up by Castle & Co., either at Charlton or their premises at Baltic Wharf, Millbank, Westminster, where the figurehead ended up. That site was bombed in 1941, in the blitz of the Second World War, and many of the figureheads and carvings which decorated the premises were destroyed or damaged. They included 'heads' which Castle's had inherited from Beatson's of Rotherhithe via their joint connection with the Beech family, notably that of the 'Fighting Temeraire' (though it was not the fiddle-head she had at Trafalgar but a male bust replacement). The remains of all except this one - which was rescued by the donor to the Museum - are alleged to have been used as boiler fuel, though other evidence suggests Castle's had transferred some items to Plymouth (including quarter-gallery figures of the 'Temeraire', which were built into a fire-surround) where they were also lost by bombing, with the firm's records, in 1944.
Show more Show less
License
Technical Information
More Information
Object Parts
Tags
head woman Figurehead
Remixes Add your Remix
Show more
Interesting objects for you
Show more 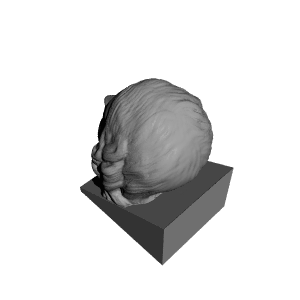