3D
Scan The World
2,041 views 92 downloads
2 collections
Community Prints Add your picture
Be the first to share a picture of this printed object
0 comments

At the corner of the West frieze a marshal stands with his head turned back towards the advancing riders. He is dressed in himation (garment of thick wool). This figure creates a strong vertical accent at a point wwhere the composition might seem in danger of running off the edge of the frieze. This relief is the corner-stone of Block XLVII from the North frieze and Block I on the West frieze of the Parthenon. His left arm is bent, his hand resting on his hip, and in his raised right hand he held a staff, once shown in paint. The sculptor of this block appears not to be one of those who carved the other sculptured surfaces of the west frieze, so notable for their skillful workmanship. It must have been hastily carved some time later, when they were preparing the blocks of the north frieze. 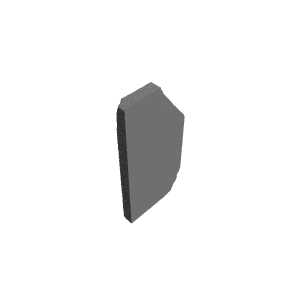 ×
2 collections where you can find Parthenon Frieze _ West I, 1 by Scan The World