3D
Scan The World
1,797 views 78 downloads
Community Prints Add your picture
Be the first to share a picture of this printed object
0 comments

The frieze of the Parthenon forms a continuous band with scenes in low relief that encircles the upper part of the cella, the main temple, within the outer colonnade. The theme represented was the procession toward the Acropolis that took place during the Great Panathenaia, the festival in honour of the goddess Athena.
The frieze consisted of 115 blocks, it had a total length of 160 m. and was 1.02 m. high. Shown in the procession are some 378 human and divine figures and at least 220 animals, mainly horses. Groups of horses and chariots occupy most of the space on the frieze. The sacrificial procession follows, with animals and groups of men and women bringing ceremonial vessels and offerings. In the middle of the east end, above the entrance to the temple, is depicted the high point of the Panathenaia, this festival of many days duration. The procession ends with the giving of the peplos, the gift of the Athenian people to the cult statue of the goddess, the xoanon (ancient wooden statue) called diipetes (sent down from heaven). Left and right of the peplos scene sit the twelve Olympian Gods.
Of the entire frieze preserved today, 50 metres are in the Acropolis Museum, 80 metres in the British Museum, one block in the Louvre and several fragments are scattered in the Vatican Museums, National Museum, Copenhagen, Kunsthistorisches Museum,Vienna; University Museum, W¸rzburg; Glyptothek, Munich. 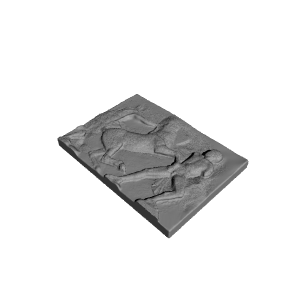