3D
Scan The World
2,856 views 106 downloads
Community Prints Add your picture
Be the first to share a picture of this printed object
0 comments

Sometimes a marshal is shown directing the traffic. Her eone is placed on the far side of the horses. Ther charioteer and foot soldier are lost all but for their hands.
This block survives as the representation of a chariot, a foot-soldier and a marshal. A team of horses pull a chariot-carriage. The chariot is being reined back and we feel the concentration of energy in the complex gathering of the horses’ rear legs. It is not clear from the remains of the foot soldier if he is slipping from the carriage or climbing into it, as his hand grips the hand rail of the chariot carriage. Meanwhile the charioteer stands with his hands extended to hold the reins. On the far side stands a marshal facing the direction of traffic.
Half of the North frieze is in the British Museum and the other half in the Acropolis museum. The total length of the north frieze was 58.70 m. The scenes begin at the northwest corner of the opisthonaos as a continuation of the procession which has already started on the west side, thus running from block N XLVII to block N I. The action develops gradually and from quiet preparation accelerates to a gallop. Ignoring the divisions of the blocks, the horsemen are depicted proceeding in groups of seven or eight, the horses partly overlapping each other. The continuous flow of horses and riders is interrupted only by the marshal (90) on block XXXIV. Yet with variety of garment, of stance and gesture of the most beautiful of the horsemen and with the occasional depiction of a man turning his head to look back, monotony is avoided.
The frieze of the Parthenon forms a continuous band with scenes in low relief that encircles the upper part of the cella, the main temple, within the outer colonnade. The theme represented was the procession toward the Acropolis that took place during the Great Panathenaia, the commemoration of the birthday of the goddess Athena.
Numbering taken from I. Jenkins, The Parthenon Frieze, 1994. Frieze slabs are marked in Roman numerals, People are marked in arabic numerals. 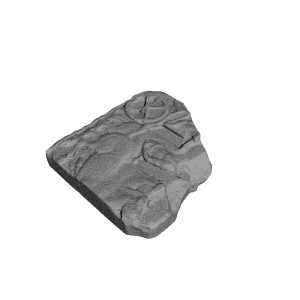