3D
Scan The World
2,147 views 86 downloads
Community Prints Add your picture
Be the first to share a picture of this printed object
0 comments

This block shows the two leading riders of the North frieze cavalcade. The lead horseman himself is missing, but the effect his reining in has on his horse is visible. The horse is brought to a sudden stop in anticipation of the chariot that is carved on the next block (Block XXVIII). A trailing arm, circular shield and part of flying drapery is carved to the left of the lead horseman. This is part of the foot soldier, who climbs into the chariot on Block XXVIII.

Figure 74 is carved partly on this and partly on the adjoining block, this figure forms a pictorial link between the cavalcade and the chariots ahead.

At this point the cavalcade gives way to a procesion of horse-drawn chariots. The leading horse is pulled up sharply by its rider (now lost). Overlapping with the front hoof can be seen the trailing left arm and round shield of a soldier on foot.

The horsemen of the cavalcade on the North frieze are composed of a series of phalanxes overlapping one on another in an unequal division. There is great variation among the riders of the North frieze in composition and in dress. Some are heavily draped in mantle and tunic, while others are all but naked. Some ride bareheaded, while others wear a distinctive form of cap. Metal reins, which are now lost, were inserted in drill-holes. An attaching fragment of the block, the head of a rider, is in the Acropolis Museum, Athens. 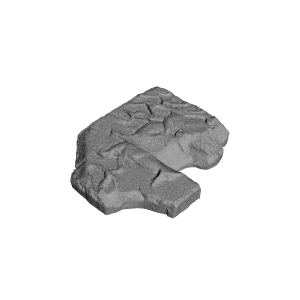 ×
0 collections where you can find Parthenon Frieze _ North XXIX, 75-76 by Scan The World