3D
Scan The World
2,081 views 84 downloads
1 collection
Community Prints Add your picture
Be the first to share a picture of this printed object
0 comments

This chariot scene echoes the action of the cavalcade: the chariot immediately ahead of the horsemen is stationary, but those in front build up speed into a head long dash until the lead chariot is pulled up short to avoid collision with the pedestrian figures ahead. This part of the frieze was badly damaged in the explosion of 1687. The head of a team of horses stands a groom, shown on the previous block (Block XXVII). The lower part of this same group is preserved on a fragment in the Acropolis Museum, Athens.
This block shows the same chariot group as is represented on Block XXVII. We see the rear parts of two horses, their tails arched, the chariot carriage, part of a foot soldier and standing above and behind him, the charioteer. The mood of the group is one of anticipation for the chariot race that lies ahead. The foot soldier grasps the hand rail of the chariot carriage and raises his right leg as he mounts the carriage. We also see, above the left shoulder of the charioteer, the remains of the crest of his helmet. This shows that he looked back. The foot soldier’s left leg and left arm were carved on Block XXIX. The charioteer stands in his long robe with his arms bent at the elbow and with his hands extended to hold the reins. An attaching fragment of the block, the head of the foot soldier, is in the Acropolis Museum, Athens. 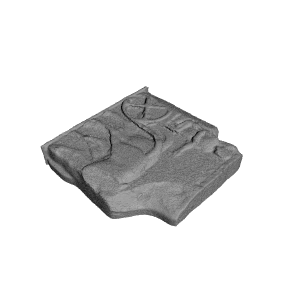 ×
1 collections where you can find Parthenon Frieze _ North XXVIII, 73-74 by Scan The World