3D
Scan The World
2,808 views 103 downloads
1 collection
Community Prints Add your picture
Be the first to share a picture of this printed object
0 comments

Block XI represents parts of three horsemen. They are dressed identically to the ones on the previous block, Block X: body armour worn over a short tunic, probably a cloak and boots. The armour is of the kind made out of two metal parts hinged at the sides, beaten to the shape of a male torso. The head of figure S30 is in the Acropolis Museum, Athens. Metal reins, which are now lost, were inserted in drill-holes. The remains of the three horsemen on this block are uniform in style. However those of the horses on the previous block, Block X, although part of the same group of riders, are carved differently. They were, perhaps, carved by different hands. 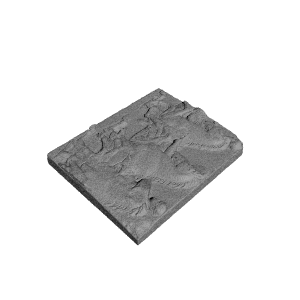 ×
1 collections where you can find Parthenon Frieze _ South XI, 29-31 by Scan The World