3D
Scan The World
3,143 views 128 downloads
2 collections
Community Prints Add your picture
Be the first to share a picture of this printed object
0 comments

The centaur brings a water-jar down on his opponent, who has left his defence open, in spite of the shield. The heads of these figures were taken by Capt. Hartmann, a member of the Venetian army that occupied Athens in 1688. They are now in Copenhagen.

Marble metope from the Parthenon (South metope IV). The South metopes in The British Museum show the battle between Centaurs and Lapiths at the marriage-feast of Peirithoos.
A Centaur, on the right, holding a large hydria raises both hands above his head. The Lapith, forced down, sits upon his chlamys. He has raised his shield to protect himself. The head and right arm of the Centaur and the head of the Lapith are in the National Museum, Copenhagen. The Lapith’s right forearm, hand and right leg, the Centaur’s legs and parts of the frame are missing. Plaster drapery possibly was added to the roughly worked patch of the background. 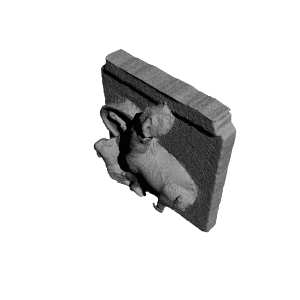