Statue of Napoleon’s sister Pauline Bonaparte as “Venus Victorious” (or Venus Victrix) displayed at the Museo Gipsoteca Antonio Canova in Possagno, Italy. This is a reproduction of an original marble statue sculpted by Antonio Canova from 1805 to 1808.

Pauline Bonaparte (20 October 1780 – 9 June 1825) was an Italian noblewoman, the first sovereign Duchess of Guastalla, an imperial French Princess and the Princess consort of Sulmona and Rossano. She was the sixth child of Letizia Ramolino and Carlo Buonaparte, Corsica's representative to the court of King Louis XVI of France. Her elder brother, Napoleon, was the first Emperor of the French. She married Charles Leclerc, a French general, a union ended by his death in 1802. Later, she married Camillo Borghese, 6th Prince of Sulmona. Her only child, Dermide Leclerc, born from her first marriage, died in childhood. She was the only Bonaparte sibling to visit Napoleon on his principality, Elba. 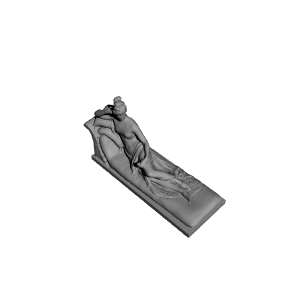 Thank you for sharing the 3D model. It was printed using ABS White Marble, looks good!