3D
Scan The World
2,638 views 149 downloads
1 collection
Community Prints Add your picture
Be the first to share a picture of this printed object
0 comments

This relief shows a Greco-Roman god, Hermes or Mercury, the messenger, who is here heralding peace after war. As he sings, he plays the lyre, which is his invention. It incorporates his attribute, a tortoise or turtle shell, which is a classical symbol of stabilty. Hermes' head is crowned with a victor's laurel wreath which the accompanying figure may have given him, as she appears to be a personification of victory.

Harry Bates (1850-99) was a stone carver and architectural decorator before he attended the Royal Academy Schools. In 1883 he won a travelling scholarship to Paris where he met Rodin, whose ways of expressing physical and emotional energy influenced him greatly. 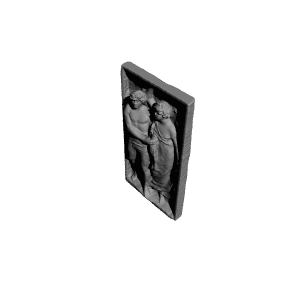 ×
1 collections where you can find Peace by Scan The World