3D
Scan The World
1,358 views 81 downloads
2 collections
Community Prints Add your picture
Be the first to share a picture of this printed object
0 comments

A living pillar of fidelity, the "wise Penelope" is the central character in the poem The Odyssey.

The creation of Penelope (1905-1912) conveys both a sense of fervour and the pain of waiting for a loved one : eyes closed, her head resting on her hand, she hopes. It is a well-known fact that the work is rooted in the sculptor's intimate history. The facial features are inspired by his first wife, Stéphanie Van Parys. The posture is similar to that of Cléopâtre in " Sevastos en extase devant les divins hindous " (" Sevastos in Ecstasy before the Hindu Gods "), at the British Museum in London, where Bourdelle took the young pupil who was to become his second wife.

Initially modelled on a small scale (42,5 cm), boldly enlarged (2,40 cm) in its final version, Penelope has the fullness of a beautiful work of architecture. Everything serves to create an effect of "vital mass". Like the fluting in a Doric column, the tunic's folds cling to the generous forms, containing the amplitude of the volumes. And the embrace of the arm gathers this figure of solitude into itself - "a soul that stands without falling". 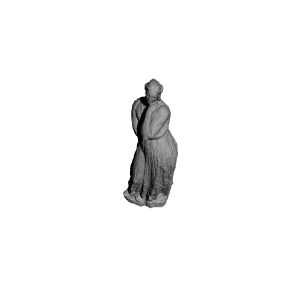 ×
2 collections where you can find Penelope by Scan The World