This is the bronze model of the Peter's I figure for the monument erected in Petrozavodsk in 1873.

Peter I, also known as Peter the Great, was born in Moscow, Russia on June 9, 1672. He was Russian czar (tsar) in the late 17th century who is best known for his extensive reforms in an attempt to establish Russia as a great nation. He created a strong navy, reorganized his army according to Western standards, secularized schools, administered greater control over the reactionary Orthodox Church, and introduced new administrative and territorial divisions of the country. In 1721 Peter I became and the emperor and with that officially ended Russian Tsardom and founded the Russian Empire.

Monument was laid on 30 May 1872, the 200th anniversary of the birth of Peter the Great. Then this model was displayed in the governor's house until the day the monument was officially installed and opened. 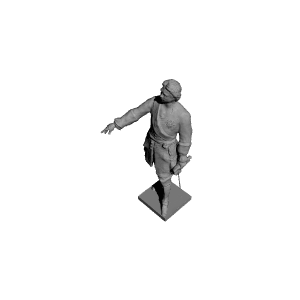