3D
Featured Scan The World
2,752 views 150 downloads
3 collections
Community Prints Add your picture
Be the first to share a picture of this printed object
0 comments

In January 1698, Peter the Great of Russia came to Deptford to study shipbuilding, staying for a few months at Sayes Court, a house he rented from the diarist John Evelyn.  Unveiled in June 2001 in what was a rather late gesture to mark 300 years since his visit, a statue stands in front of Greenfell Mansions off Glaisher Street beside the Thames at the entrance to Deptford Creek.

During his visit, we are told that Peter worked incognito in the yards and had some drunken parties. The statue is by Mikhail Shemyakin and features Peter, a grand chair and a funny looking small man, referencing Peter's interest in genetic curiosities. 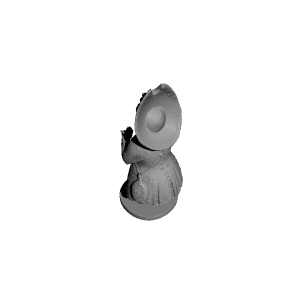 ×
3 collections where you can find Peter the Great by nebulousflynn