3D
Scan The World
4,426 views 264 downloads
3 collections
Community Prints Add your picture
Be the first to share a picture of this printed object
0 comments

This regal figure of Amenhotep II shows him holding the traditional insignia of kingship against his chest—the scepter in the form of a crook in his left hand and the flail or whip in his right. He wears Upper (i.e., southern) Egypt’s distinctive crown, embellished by the uraeus cryptogram, or royal cobra, and a broad collar composed of five bands. His body is enveloped in the jubilee robe—worn by kings at festivals, particularly the Sed-festival—in which he was physically and spiritually rejuvenated. Usually the Sed-festival was observed after a reign of thirty years. Since most pharaohs never reached their thirtieth year, however, some celebrated it prematurely, including Amenhotep II. The sculpture was originally part of a larger figure seated on a throne, which was excavated in 1896 at the Temple of Mut at South Karnak. Fragments of the throne that are now lost bore inscriptions of Ramesses II (“the Great”), who lived more than a century after Amenhotep II. Ramesses usurped this and many other sculptures of his predecessors and converted them into images of himself. In this case Amenhotep’s eyebrows were erased and his eyes, nose, and mouth slightly reshaped to make them resemble those of Ramesses. 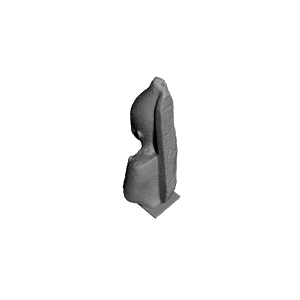 ×
3 collections where you can find Pharaoh Amenhotep II at The Kimbell Art Museum, Texas by 3DLirious