3D
Scan The World
1,909 views 94 downloads
Community Prints Add your picture
Be the first to share a picture of this printed object
0 comments

Ivan Mestrov made a peculiar choice in his representation of the recurrent subject of the Pietà – the moment after the descent from the cross, Mary holds her son. This theme appeared at the end of the Middle ages, and its iconography evolved through the centuries. Since the 16th century, the Christ was most often represented at his mother's feet as she is holding his upper body. Here, Ivan Mestrovic chose an anterior iconography, closer to the 14th century, where Jesus was depicted sitting on his mother's lap.

The most striking element of this sculpture is the pathos: probably inspired by the strong Expressionist movement between World War I and II, Mestrovic sculpted raw bodies, especially the features of the face that express deep sorrow. Also the tenderness with which Mary holds her son's head and kisses his cheek evokes the Madonna and Child theme, which only emphasizes the pathos. 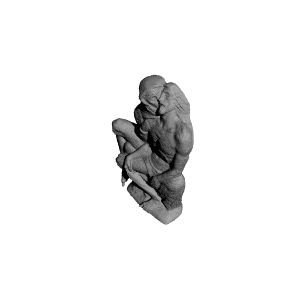 ×
0 collections where you can find Pietà by Scan The World