Unlike amphorae, this large jar, used for storage, has no neck. It probably held liquid, judging from the evacuation hole near the bottom. The clay, intentionally left largely unworked, lends solidity to this type of vase, which was found in large quantities in storage units of the palaces of Crete during the Minoan period (so-called after the mythical king Minos). 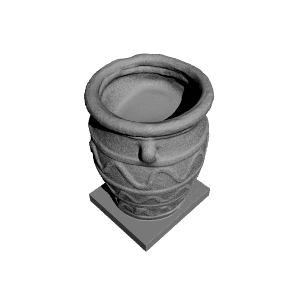