Pomona at The Louvre, Paris

3D
Scan The World
4,589 views 419 downloads
1 collection
Community Prints Add your picture
Be the first to share a picture of this printed object
0 comments

Pomona at The Louvre, Paris

Pomona was a goddess of fruitful abundance in ancient Roman religion and myth. Her name comes from the Latin wordpomum, "fruit," specifically orchard fruit. She was said to be a wood nymph.

In the myth narrated by Ovid she scorned the love of the woodland godsSilvanus and Picus, but married Vertumnus after he tricked her, disguised as an old woman. She and Vertumnus shared a festival held on August 13. Her priest was called the flamen Pomonalis. The pruning knife was her attribute. There is a grove that is sacred to her called the Pomonal, located not far from Ostia, the ancient port of Rome.

Pomona was the goddess of fruit trees, garden, and orchards. Unlike many other Roman goddesses and gods, she does not have a Greek counterpart, though she is commonly associated with Demeter. She watches over and protects fruit trees and cares for their cultivation. She was not actually associated with the harvest of fruits itself, but with the flourishing of the fruit trees. In artistic depictions she is generally shown with a platter of fruit or a cornucopia.

A statue of Pomona a set atop the Pulitzer Fountain in Manhattan's Grand Army Plaza in New York. There is a statue of Pomona in Reykjavik, Iceland: just north of the BSI Bus Station, in the little park bordered by Gamla Hringbraut and Laufasvegur streets. Pomona is briefly mentioned in C. S. Lewis's children's book Prince Caspian. 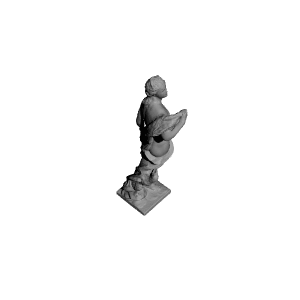 ×
1 collections where you can find Pomona at The Louvre, Paris by Scan The World