Portrait head of the poet Menander

3D
Scan The World
1,522 views 49 downloads
Community Prints Add your picture
Be the first to share a picture of this printed object
0 comments

Portrait head of the poet Menander

This head was found in Athens.

The portrait has been identified as Menander (321/41-291/90), the best-known representative of New Comedy. The great dramatic poet was honoured with a statue carved at the end of the 4th century B.C. by Kephisodotos and Timarchos, the sons of Praxiteles, which was erected in the Theatre of Dionysos and depicted him seated.

The head belonged to a statue that was a Roman copy of the above mentioned statue. 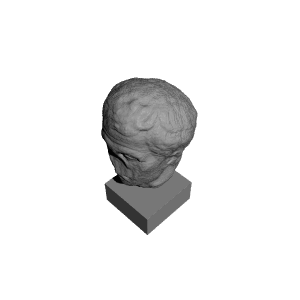