3D
Featured Scan The World
2,495 views 192 downloads
2 collections
Community Prints Add your picture
Be the first to share a picture of this printed object
0 comments

Identified since at least the second half of the 18th century as a portrait of the poet Anacreon (c. 570-485 BC) on the basis of similarities with the portrait type then commonly associated with the figure (of whom, for instance, there is a portrait with an inscription bearing his name in the Musei Capitolini in Rome), this head with its band ending in two vittae on the figure's shoulders, may certainly be identified as the portrait of a poet. The rigidly calligraphic rendering of the hair and beard suggests that the work is a copy of a bronze original probably of the mid-5th century BC. 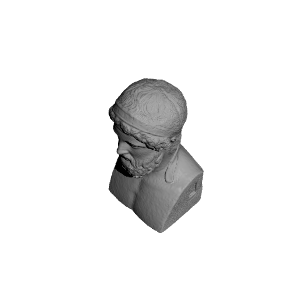