3D
Scan The World
5,452 views 244 downloads
Community Prints Add your picture
Be the first to share a picture of this printed object
0 comments

This bust was probably carved several decades after the reign of Emperor Caracalla (reigned AD 211-17) and bears many similarities to that emperor's portrait type, which had an enormous influence on the private portraiture of the following generation. Caracalla's later portraits have animated expressions, and the head is often turned to his right, giving the impression of movement. This example imitates the emperor's image but has the individual's own distinct features.
It is currently on permanent display at the Walters Art Museum in Baltimore, Maryland USA.
This object is part of "Scan The World". Scan the World is a non-profit initiative introduced by MyMiniFactory, through which we are creating a digital archive of fully 3D printable sculptures, artworks and landmarks from across the globe for the public to access for free. Scan the World is an open source, community effort, if you have interesting items around you and would like to contribute, email stw@myminifactory.com to find out how you can help.
Show more Show less
License
Printing Details 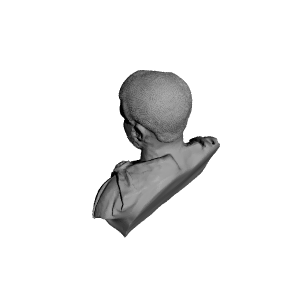 ×
0 collections where you can find Portrait of a Roman Man, Baltimore, USA by Scan The World