Portrait of a Young Caracalla at The State Hermitage Museum, St Petersburg

3D
Scan The World
2,021 views 56 downloads
Community Prints Add your picture
Be the first to share a picture of this printed object
0 comments

Portrait of a Young Caracalla at The State Hermitage Museum, St Petersburg

Caracalla (Marcus Aurelius Antoninus; 188-217) has gone down in history as one of the cruellest rulers of Ancient Rome. He maintained power by relying on the army, with which he was popular thanks to his generosity, physical endurance and unpretentiousness when on the battlefield. In 212 he published an edict giving Roman citizenship to all the free population of the Empire, thus effectively giving barbarians and Romans equal rights. The Hermitage portrait shows Caracalla at the age of just 12 or 14. Portraits such as this, showing the heir to the throne, were created after Caracalla was named Caesar (198) and heir to his father Septimius Severus (193-211). The unknown master creates an excellent characterization of the future emperor: in the suspicious half-smile and heavy gaze of the teenager we see the man who began his rule by murdering his younger brother Geta and his followers. An ancient biographer tells us that "in his childhood Caracalla was marked for his gentle behaviour and warmth. But as he grew out of childhood, he became enclosed, gloomy and arrogant". 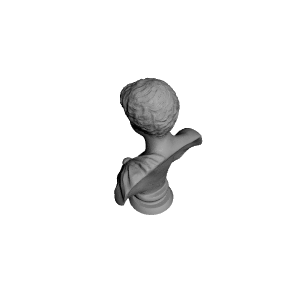 ×
0 collections where you can find Portrait of a Young Caracalla at The State Hermitage Museum, St Petersburg by Scan The World