Portrait of an Elderly Woman

3D
Scan The World
2,016 views 108 downloads
Community Prints Add your picture
Be the first to share a picture of this printed object
0 comments

Portrait of an Elderly Woman

This distinctive hairstyle reflects the fashion exhibited by Roman matrons between the end of the Late Republican and early Imperial period, and was favoured by Octavia, sister of the emperor Augustus.
This hairstyle divides the hair into two masses: the back portion is ties in a bun on the nape of the neck, while the front portion is divided into four strands, two of which form a small know (nodus) over the forehead, while the remainnig two strands fold back over the head and are tied to the bun at the back.

End of 1st Century BC. 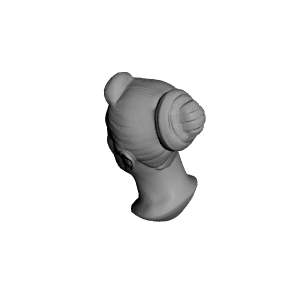