3D
Scan The World
1,408 views 96 downloads
1 collection
Community Prints Add your picture
Be the first to share a picture of this printed object
0 comments

Provenance unknown. "When Joulin, then Rachou, cataloged it, she was still mounted on a bust-hermès draped in plaster or stucco.This presentation evokes the practices of the sculptor Beurné in the years 1830-1840 and suggests that the head was already in the first half of the nineteenth century, however, neither the 1826 lists nor the catalogs of 1828 and 1835 allowed it to be recognized and assigned to it for the excavations of Chiragan, nor was it found in the catalog in 1865 by Ernest Roschach, but it is included in the manuscript catalog of 1844 by Alexandre Du Mege (...) In this brief notice, Du Mège reveals nothing of the archaeological site or the collection from which the head was discovered."
D.C. in Julio-Claudian Portraits, 2005, p.53 to 55 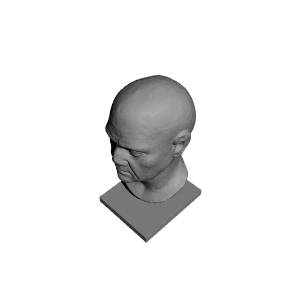 ×
1 collections where you can find Portrait of an unknown Isiac Priest (?) head by Musée Saint-Raymond