3D
360°
Featured Scan The World
3,898 views 789 downloads
10 collections
Community Prints Add your picture
Be the first to share a picture of this printed object
0 comments

This copy was acquired in 1898, cast from a Roman marble in the Vatican, but stylistically very smiliar to the Glyptotek's staue of Demosthenes. The original Greek version (now lost) was created by the sculptor Polykleitos, around 40 years after the death of Demosthenes in 322 BC. Demosthenes committed suicide when the Macedonians wanted him extradited for speaking out against their supremacy over Greece, being a critic of Alexander the Great. Demosthenes advocated the maintenance of democracy against any force, thereby gaining long-lasting significance in many centuries that passed from his death.

Demosthenes was a Greek statesman and orator of ancient Athens. His orations constitute a significance expression of contemporary Athenian intellectual prowess and provide an insight into the politics and culture of ancient Greece during the 4th century BC. Demosthenes learned rhetoric by studing the speeches of previous great orators. He delivered his first juridical speeches at the age of 20, in which he argued effectively to gain from his guardians what was left of his inheritance. 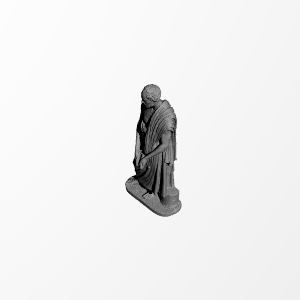