3D
Scan The World
3,036 views 249 downloads
4 collections
Community Prints Add your picture
Be the first to share a picture of this printed object
0 comments

Nicholas II was the last Emperor of Russia and the son of Emperor Alexander III and Empress Marie Feodorovna, née Princess Dagmar of Denmark. He ascended to the throne on 20 October 1894. His reign was characterised by rapid economic growth and the acute worsening of the country’s socio-political situation, all of which took place against a background of industrial modernisation and agrarian reform. The State Duma was also established during this time. At the same time, culture flourished, and this era came to be known as the Silver Age of Russian artistic culture. The emperor’s mild character was not conducive to creating an image of a strong state identity. The weakening of the monarchy’s power occurred at the same time as some serious shocks: the Russo-Japanese War (1904–1905), the First World War (1914–1918) and the revolutions of 1905–1907 and 1917. On 2/15 March 1917, the emperor abdicated the throne. That summer, he was sent to Tobolsk and then taken to Ekaterinburg. On the night of 16 July 1918, he was shot with his family in a house belonging to the engineer Nikolai Ipatyev. In 1998, his remains were reinterred in St Petersburg in the Peter and Paul Cathedral. On 20 August 2000, the Russian Orthodox Church canonised the emperor and his family as martyrs.

This marble bust of Nicholas was done by Mark Antokolsky in Paris. Very detailed marble, he remade it several times also in bronze. The portrait of Nicholas II is distinguished by a special firmness and severeness, where the technical perfection of the execution is combined with the high-detailed of the model itself and the rare poignancy of the image, which borders on prophetic foresight of the emperor's tragic fate. 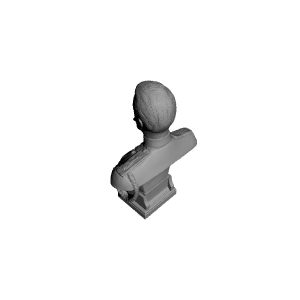