3D
Scan The World
2,156 views 91 downloads
3 collections
Community Prints Add your picture
Be the first to share a picture of this printed object
0 comments

This portrait of Euripides is a cast of the Roman marble copy of the greek original and comes from The National Museum of Naples.

Euripides is one of the three Athenian tragedians whose works we possess in more than fragments; indeed, the surviving plays of Euripides outnumber those of Aeschylus and Sophocles combined (seven each compared with Euripides’ eighteen, or if we count the probably spurious Rhesus, nineteen). Some of this is due to chance, but Euripides was the most performed, most read, most widely admired tragedian of the later Greco-Roman world, and arguably the most influential on later drama. From the evidence available for comparative judgments (admittedly sparse), his works appear to have offered the greatest range of moods and tones, provided the most unsettling perspectives, and engendered the greatest controversy. Euripidean drama still challenges theatergoers, readers, and critics alike. 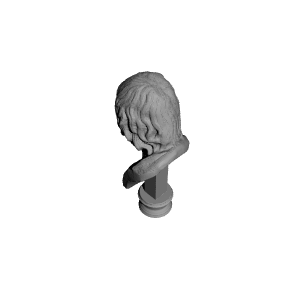