Augustin Pajou sculpted the portrait of a dreamy young woman, unaware that she is living the last moments of innocence before her tragic destiny unfolds. He portrayed the daughter of Farmer General Jean-Joseph de Laborde a year before her marriage to Count Charles de Noailles, the future Duke de Mouchy. The beauty of the model and the finesse of Pajou's execution make it one of the most beautiful female portraits in 18th-century sculpture.

The portrait shows a very young, serious-looking woman, still hardly more than a child. Pajou's very sure modeling captures her uniform features and smooth skin, which contrast with her thick hair, whose locks are expertly arranged and tied with a ribbon. Nathalie's sideways gaze gives her a dreamy look. These are the last moments of calm and innocence of a young woman whose tragic destiny would end in her madness. She was imprisoned during the Terror after her husband had fled the country, and her father and most of her husband's family were guillotined. Freed in 1794, she went to England to join her husband, only to find him living with a mistress. He tried to rid himself of her by arranging an intrigue with one his friends. Indignant, she returned to France, where she led a dissolute existence. In 1805 she met Chateaubriand, with whom she had a passionate and stormy affair that ended in 1812. Already mentally unstable, she definitively lost her reason during the Hundred Days, the turbulent period that rekindled the anxiety of the Revolution. She spent the last twenty years of her life in a mental asylum.

This bust's elegant simplicity and finesse of execution make it one of the most beautiful female portraits in 18th-century sculpture. Formerly in the Deutsch de la Meurthe collection, it was bought by the Louvre at auction in 1991. It joined another magnificent female portrait by Pajou, his bust of the famous portrait painter Elisabeth Vigée-LeBrun.

Printed by PRINT3Dforum.com Printing Services - Support required. Other than that, pretty much straightforward print. 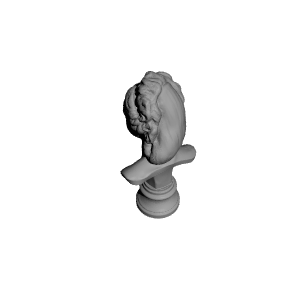 I really love this model, sliced with chopchop3d