Portrait of Philip The Arab at The State Hermitage Museum, St Petersburg

3D
Scan The World
2,928 views 72 downloads
Community Prints Add your picture
Be the first to share a picture of this printed object
0 comments

Portrait of Philip The Arab at The State Hermitage Museum, St Petersburg

Philip the Arab (c. 204-249, Emperor from 244) came from a barbarian family. In his struggle for power he relied on the army and used any means - from slander to murder. Having got rid of the Emperor Gordianus III (ruled 238-244), Philip became head of state; it was during his reign, in 247, that Rome celebrated its millennium. The Emperor is depicted wearing a tunic and toga, the straight folds of which do not convey any sense of the texture of the fabric; short notches convey the hair and beard, while the facial features are generalized; there is no fine modelling on the surface. Yet this rough weather-beaten face must be a true likeness in the traditions of Roman portraiture. The asymmetry of the features gives the expression a sense of liveliness, combining will and cruelty with suspicion and hidden fear. The simplified and expressive plastic language appeared in Roman art under the influence of the barbarian provinces and was in keeping with the tastes of the new rulers of the Empire. 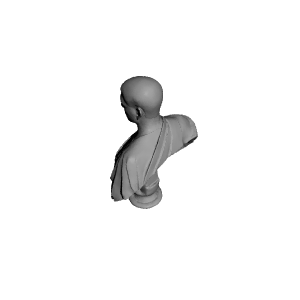 ×
0 collections where you can find Portrait of Philip The Arab at The State Hermitage Museum, St Petersburg by Scan The World