During his early, pre-Revolution period leading into 1917, Mayakovsky became renowned as a prominent figure of the Russian Futurist movement, being among the signers of the Futurist manifesto, A Slap in the Face of Public Taste (1913), and authoring poems such as A Cloud in Trousers (1915) and Backbone Flute (1916). Mayakovsky produced a large and diverse body of work during the course of his career: he wrote poems, wrote and directed plays, appeared in films, edited the art journal LEF, and created agitprop posters in support of the Communist Party during the Russian Civil War. Though Mayakovsky's work regularly demonstrated ideological and patriotic support for the ideology of the Communist Party and a strong admiration of Vladimir Lenin, Mayakovsky's relationship with the Soviet state was always complex and often tumultuous. Mayakovsky often found himself engaged in confrontation with the increasing involvement of the Soviet State in cultural censorship and the development of the State doctrine of Socialist realism. Works that contained criticism or satire of aspects of the Soviet system, such as the poem "Talking With the Taxman About Poetry" (1926), and the plays The Bedbug (1929) and The Bathhouse (1929), were met with scorn by the Soviet state and literary establishment.
In 1930 Mayakovsky committed suicide. Even after death his relationship with the Soviet state remained unsteady. Though Mayakovsky had previously been harshly criticized by Soviet governmental bodies like the Russian Association of Proletarian Writers (RAPP), Joseph Stalin posthumously declared Mayakovsky "the best and the most talented poet of our Soviet epoch." 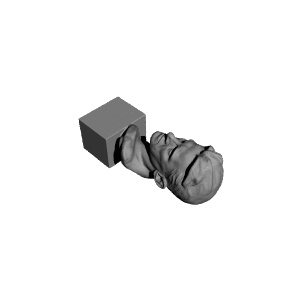 I cut the base to save on some material. Astonishing model.