Portrait of the artist's wife

3D
Scan The World
1,562 views 44 downloads
Community Prints Add your picture
Be the first to share a picture of this printed object
0 comments

Portrait of the artist's wife

Born on 11 July 1879 Garonskis manor house near Lake Jugla Dreiliņu parish. He studied at the Riga City High School, in 1897, he joined the Saint Petersburg Art and Industry Academy, where training ended in 1905. Won a scholarship, he went to Paris, where, like his contemporaries Gustav Skilters and Theodore Zalkalns acquainted with Auguste Rodin's artistic principles. Operated Latvian artists union Dwarf and from 1910 participated in art izstādēs.Pirmā World War II at the end of 1918 returned to Latvian, was the National Museum of Art Director (1920-1944), Latvian Academy of Applied sculpture workshop manager (1922-1944), cultural events organizators.Otrā world war II at the end of 1944, fled to Germany in 1950 emigrated to ASV.Miris of 17 August 1966 in Dayton Ohio USA.

Woodpecker creative development of the important role played material change - he moved from bronze to hard materials, one of the first Latvian portrettēlniecībā began to use granite ( "A. Saulieša portrait"), which created the impression of monumentality. Woodpecker has also created grave monuments (such as Juris Alunāns and Rudolf Freshwater Pearls).

Woodpecker oeuvre little influenced by impressionism, he was more engaged with characteristic precision. 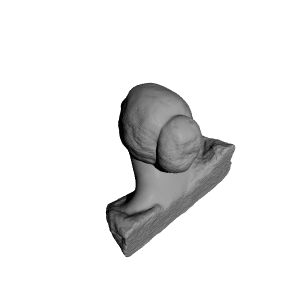